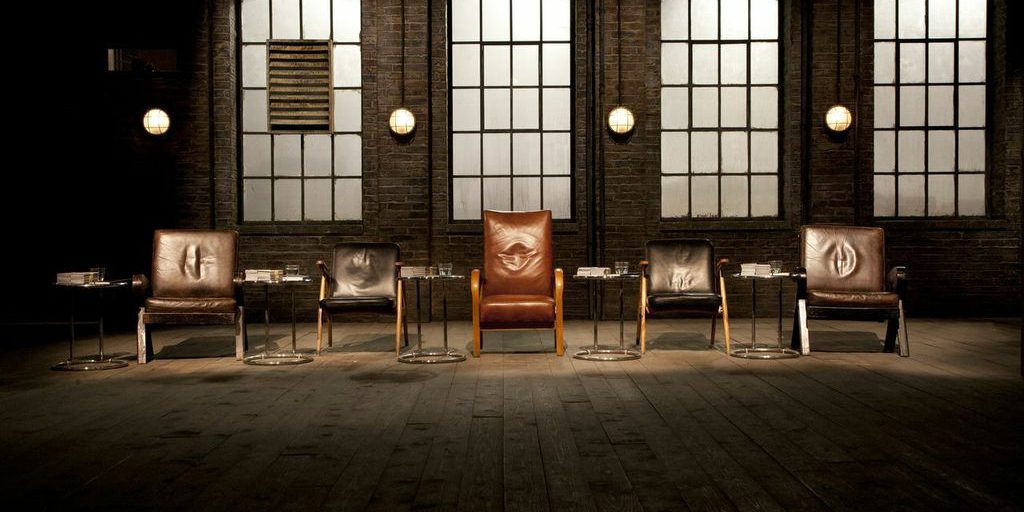 In the summer of 2018 we appeared on BBC Dragons’ Den, here’s what happened when Look After My Bills Co-Founders Henry  and Will made their debut appearance on the television show.

Pitching our free service that stops people getting ripped off on their energy bills by switching their energy suppliers.

The night before the Dragons’ Den filming, in a Manchester Premier Inn, Henry and Will rehearse their pitch in hotel dressing gowns in front of the bathroom mirror until the early hours of the morning. (Premier Inn wasn’t as fancy as this though!)

After a few hours sleep Will’s alarm goes off at 6am and within half an hour they are in a taxi and driven to the studio.

By 7am Henry and Will have arrived at the Dragons’ Den warehouse in Salford. The other contestants have brought along a ‘mountain of pies, fluorescent fishing tackle and a groundbreaking electrical plug’.

Then after a few hours of rehearsing their pitch again and again. They get the call to enter the den.

The first time the producer turned the camera on for their practice pitch Will recalls ‘they screwed up miserably. So they did another one, which was even worse!’

Once their practice was over they went back to the lift, and the doors closed whilst the dragons took their chairs.

Well rehearsed, Henry and Will gave it their all! Explaining that Look After My Bills aims to find the best gas and electricity deals, and switches people automatically when their deals run out. The Dragons were attentive and you could tell they were excited.

Henry added “we’ll all look back in 15 years time and think it was crazy that people had to spend hours searching on comparison sites or calling up companies to get a good deal”.

“I love this business for many reasons – anything that disrupts the energy industry has got to be good news.”

Taj responded by saying that “a lot of the time people come into the den and quote market sizes”.

Multi-million price tags always ruffles the feathers of the dragons, this time was no different as he asked “How did you get to that figure and why do you think it’s worth 9 million pounds?”

The co-founders put up a robust defence of their evaluation explaining ‘it’s a combination of their track record and experience in this space but also the size of the market in front of them’. Elaborating by stating Look After My Bills is a growing business born out of consumer demand.

“What’s your gross margin going to be in 2020?” “What if a big supplier doesn’t want to be on your platform?” “Do you see any changes in the legislation that’s going to stop you” “Why aren’t you giving us a better deal?” It was a long, intense grilling but eventually all five Dragons made offers.

The first offers on the table were 7% from Taj Lalvani, 10% from Peter Jones, 8% from Touker Suleyman, 3% from Deborah Meaden, and 1% for ⅕ of the money from Jenny Campbell.

Whilst the Dragons Den TV producers play dramatic music for the TV audience, Henry and Will discuss the offers at the back of the room, in silence.

Although they were flattered, they were only willing to double the offer from 1% to 2% and they would need to ask for £150,000.

And with that he was the first dragon out. Followed by Deborah Meaden and Peter Jones.

Presenter, Evan Davis then questioned whether ‘2% was enough to tempt the other dragons from out of the covers?’

And it was! Taj changed his offer to 120,000 for 3% of the company, however Will and Henry requested that Jenny be brought into these negotiations as they would like both dragons on board.

Jenny, happy to share with Taj, warned the guys that they could possibly walk away with nothing on the basis of 1%.

There were a few tense seconds…

…Then Henry announced they had a deal!

What was the final deal? Look After My Bills got the best deal EVER on the Dragons’ Den!

Tej Lalvani and Jenny Campbell shared the investment of £120,000 for 3% of the company.

How did they feel about that? This bear hug says it all. Well, there was lots of nerve-wracking waiting, 6 hours in fact!

Adding to the anxiety was the hair and makeup… But what freaked Will out the most was that… the lift is fake!!! Although the TV show only showed around 20 minutes, it was actually three hours of intensity. Henry and Will were grilled big time.

For those interested in why Henry and Will were adamant that they could not part with more than 2% of their company, it was to protect their current investors.

Jaj Lalvani suggested that Henry and Will give 0.5% of their own share in the company to meet the 3% the dragons were demanding.

Since filming we had to wait 5 months until the show aired.

In August, staying late at work and laptops at the ready, we watched our Dragons’ Den episode. Not surprisingly we had a flood of interest immediately! There’s been A LOT of articles talking about our service too. The BBC, Mirror, The Standard, The Express, The Times, The Telegraph, The Sun, The Daily Mail, The Bristol Post and so many more. It would be easier to list who hasn’t been talking about us!

Will wrote a funny, personal account of what happened for i News too!

You can watch our TV appearance below:

If you want to find out more about auto-switching and what it means then check out our auto switching blog.